Hey boys and girls! Welcome to another exciting edition of Ask Mr. Science!

I hope this letter finds you well. I have a question of some import that I would very much appreciate if you could answer for me: Fuckin’ magnets–how do they work?!

Thank you. As always, your prompt response is appreciated.

Well, Mr. Posse, that’s a great question. I myself have wondered the same thing for years, and would probably have answered you with "scary dark magic" or "aliens" or "beats the hell out of me," except I was surreptitiously educated in the shower when I noticed my roommate’s bottle of body wash. 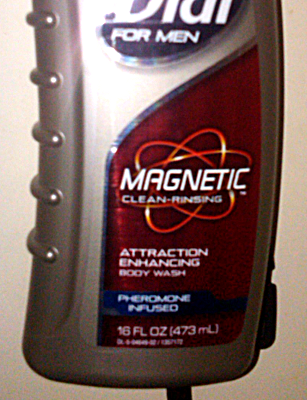 I can now say definitively how magnets work: nucular power.

You might be wondering how I discovered this, and I’ll tell you. You see those little curvy lines behind the word "magnetism?" They are scientific code for nucular.

Really. I know, I know, you’re probably amazed by this, but I can’t claim that I am some sort of genius symbologist. It’s merely because, being a man of science, I am part of the shadowy world-wide conspiracy of scientists who control world governments, international banking, and when McDonald’s brings back the McRib.

Per my membership, I am privy to the secret scientific decoder ring. It is how I know that "interlocking ellipses" means "nucular power." It is also how I know that "genetic mutation" means "totally sweet superpowers," "vitamin C" means "sure-fire miracle cure-all," and "evolution" means "a lie created to discredit all religions."

What you may be wondering is what this symbol is, and how it came to represent nucular power.

In scientific lingo, it is known as a Boer Model. It is so named because its inventor, Neils Bohr, used it when fighting along side Lord Robert Baden-Powell in the Boer Wars. Were it not for the awesome power of this model, we would all be ruled by Attila the Hun today. And nobody wants that.

(Baden-Powell, for you scholars of historical trivia, also went on to found the Boy Scounts, convinced that in the future, "it will be essential for all young men to know how to kill a man, or a death-robot in the semblance of man, with a laser. For lo, I have read it thus in the tea-leaves." When Baden-Powell’s prophecy did not come true, the Scouts began to focus on other important but less cool skills, like camping and knot-tying and first aid.)

So, as you can see, the Boer Model is one of science’s most important inventions. Not only does it remind us of the terrifying power of nucularness (which we even today worship as some sort of deity, hoping our libations of honeyed wine and old comic books will keep us from its wrath), but by merely applying its image to any invention, it becomes 43.76982% more scientific. (There are, incidentally, more of these science-imbued symbols, which I cannot show for fear they may fall into the hands of supervillains. Suffice it to say we learned our lesson after that incident with the weather-control device.)

But not only does nucularness cause magnetism, it has also been harnessed to provide us with these other miracles of science:

And that’s how magnets work.