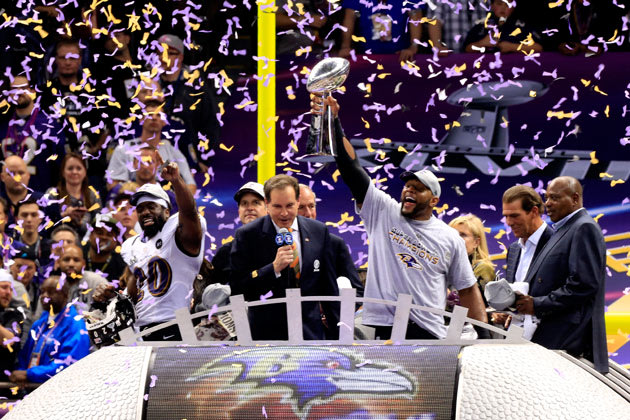 The instant the game ended, I let out a frustrated half-scream, cut short out of consideration for the people in the room with me.  I went to my bedroom, closed the door, turned the TV onto Adult Swim, and tried to avoid Twitter, Facebook, ESPN.com, and anything resembling human interaction for as long as possible.

The very nightmare that had me sitting up straight in bed had happened:

The San Francisco 49ers lost Super Bowl XLVII, and had done so in agonizing fashion.

The game could have very well gone in the Niners’ favor had one of a handful of minor events gone San Francisco’s way: Winning the coin toss (which would have kept them from punting the ball over and giving the Ravens excellent field position and putting them down by a touchdown immediately, with the added bonus of exterminating the possibility of the kickoff return touchdown that Baltimore started the second half with), either taking the Delay of Game penalty or, you know, ACTUALLY SNAPPING THE FUCKING BALL IN TIME, during the second half, saving a timeout for when Baltimore tried to run as much clock off as possible when San Francisco failed to convert a fourth-and-goal, or, of course, if the officiating crew had seen fit to call Pass Interference on that final offensive drive for Kapernick and company.

My week would have been considerably different as well – rather than avoiding sports media until Wednesday, I would have consumed as much of it as possible, reliving my favorite sports franchise’s ultimate victory.  I wouldn’t have avoided reading anything on my Facebook or Twitter timelines, and I’d probably still be rocking that obnoxious “Quest For Six” avatar.  My 49ers cap would still be on my head today, rather than in the closet, hidden away so it wouldn’t be a constant reminder of the very-pointless-yet-very-unique disappointment that only someone who’s a fan of sports can understand.

For those of you who aren’t fans of sports (and I imagine, given that we cater to a distinctly “geek” crowd, that’s most of you), let’s get one thing straight: I’ll happily concede that if Super Bowl disappointment was the worst thing that ever happened to me as a human being, I’d be living a damn good life.  But, as any sports fan will tell you, you’re very lucky when you’re able to see the team you’re rooting for actually win a title.

The last time I saw San Francisco win a title was January 29, 1995, destroying the Stan Humphries-led San Diego Chargers by a score of 49-26.  For those of you keeping score at home, that was 18 years ago.  In fact, the 49ers hadn’t even made it past the Divisional Round (that’s the second round, noobs) of the playoffs before last year’s Kyle Williams debacle that masqueraded as the 2011 NFC Championship Game.

For those of you saying that this season was possibly just the beginning of a new 49ers dynasty of regular and postseason success lead by newly-minted superstar Colin Kaepernick and coach Jim Harbaugh, I’d love to believe you.  But I also wanted to believe that Steve Young would go on to win another Super Bowl, but as we just discussed, he never even came close.  For anyone who has any sort of rooting interest in the 49ers, the worst part of the loss isn’t how agonizingly close they came to a historic comeback and record-tying sixth championship – it’s the uncertainty of knowing whether the next opportunity to cheer for them in the Super Bowl will be next year, the year after that, eighteen more years from now, or some sort of Chicago Cubs-esque drought.

Until news came out about how the 49ers’ Delanie Walker lost his aunt and uncle to a drunk driver, just hours after the Super Bowl, I would have said that the player I felt the worst for was former starting quarterback Alex Smith.  It’s easy to say now that drafting Smith over Aaron Rodgers in the 2005 draft was the wrong decision, but as someone who witnessed the general incompetence of the Nolan and Singletary coaching staffs, in addition to the revolving door of offensive coordinators, I sometimes question if Rodgers would have done any better on a couldn’t-get-much-worse 49ers team for his first six seasons in the NFL.  Smith certainly didn’t deserve to have his own shot at starting a Super Bowl derailed by a single teammate, nor did he deserve to lose his job to Kaepernick thanks to a concussion, regardless of the fact that Kaepernick ended up vastly outperforming his former mentor on his meteoric rise to stardom.  But, to quote William Munny, “’Deserve’ has got nothin’ to do with it”.  In the offseason, Smith will likely be either traded or released by San Francisco, and his career, barring an unlikely redemption story, will likely carry the stigma of “That guy the Niners picked over Aaron Rodgers”.  I wanted Smith to have a Super Bowl ring to show for his efforts with the team, even if he was holding a clipboard as the game unfolded.  That opportunity, at least with the team that drafted him, is now forever gone.

I really want to believe that Kaepernick/Harbaugh is the new Brady/Belichick (minus the videotaping scandal).  I want to believe that this wasn’t the last time I’ll ever see the 49ers in a Super Bowl, or that the last championship I’ll ever see them win will be from when I was twelve years old.  I can’t say that with any certainty, though.  Maybe the next time you wonder why people talk about sports as if its some dire, do-or-die part of their lives, you’ll think about this article or, God forbid, fans of the Chicago Cubs.  All in all, it’s a rather insignificant part of my life to which I’ve put very little real effort into.  But, on those rare occasions when your team makes it that far, only to fall short at the end, there’s no way around the facts: