Adam “Experimilk” Perry joins John in a special episode to discuss the results of the 2014 Evolution Championship Series. 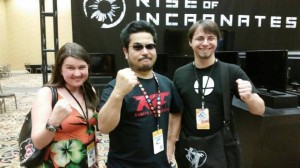