The KFC Double Down

Months ago, word began to trickle out about a wonderous sandwich, a sandwich the likes of which no mortal had ever seen or tasted before. It was the Double Down from KFC, otherwise known as "a stack of meat and cheese". It would seem that the fast-food wunderkind at Kentucky Fried Cockroach (er, Chicken) had the thought, the wonderous, terrible thought, "What’s people’s least-favorite part of the sandwich?" Being that their primary business is selling delicious meat products (even the mashed potatoes count, as they have meaty gravy on them and the souls of small Ohio children mixed into them – and I have it on good account that souls do count as meat) from unfortunate fowl, the logical conclusion they came to was "the bread". The natural (or not-so-natural) conclusion would be to do away with the bread entirely, replacing it with two fillets of breaded and deep-fried bird. In the middle is a delicious filling of bacon, jack cheese, and something referred to as "the Colonel’s sauce", which I desperately hope is neither radioactive nor contains any whitey’s bodily fluids.

As some other people have pointed out, this idea is actually not new. People have been stuffing chicken with pork products and cheese for some time now. It’s otherwise known as "chicken cordon bleu", but this is without some frog chef throwing in his two cents (or whatever it is the French use instead of pennies), and it substitutes bacon, the holiest of meats, for the usual ham (its lesser relative – the Shemp to bacon’s Curly, as it were). I dub it "Redneck Chicken Cordon Bleu". 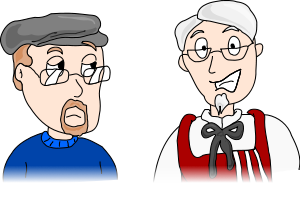 While I, your esteemed Chef, am not averse to a good piece of sourdough or rye, in general, I tend to agree that the best part of any sandwich is the meat and cheese. To quote PETA, meat is murder and murder is just fucking delicious. I always eat my kill. So it would seem that this sandwich is a natural match for yours truly’s epicurean tastes.

Then I tried one.

Upon first gazing on this holiest of holies in the drive-through, my first thought was "That’s it? What the hell, Colonel?" I’ve been around and I know that fast-food ads always lie, but this was…nowhere near  the gargatuan stack of dead birds and pigs implied by the pictures. In fact, it was a bit tiny (please, no jokes about the Maitre d’s man-parts here).

With a shrug like Atlas, I began to scarf down the unholy perversion of all things sandwich-like. The flavor was…okay. It certainly was not the buffet of flavors I expected. In fact, it was a little disappointing. When you hear the description "It’s a bacon and cheese sandwich, but with the buns replaced with meat!", you expect it to be an epicurean delight unmatched throughout the ages. Instead, it’s…just the usual KFC. Nonplussed, I kept eating, hoping that some delayed magic might kick in and cause my taste buds to spontaneously combust.

About a quarter of the way through, my left arm began to feel numb. I shrugged it off, telling myself, "Look, this thing is only about 600 calories – I’ve plowed my way through Hardee’s Monster burgers on a regular basis. I haven’t died of a coronary yet, and there’s no way I can be dying of ecstasy."

Finally, my heart said, "Ah, fuck it. I give up." and stopped attempting to pump pure cholesterol through my veins. It was a rather odd experience, because my internal organs rarely speak, but apparently this was an occasion that warranted it.

"Fuck you," my heart replied (before this moment, I was unaware that any of my internal organs used such foul language). "I’m going on fucking strike."

So I died. The last thing I saw was the paramedics entering the room. They took one look at the half-eaten KFC Double Down beside my rapidly-cooling corpse and said, "Damn – not another one of these." with the sort of disgust usually reserved for teabaggers, furries, and the morbidly obese. 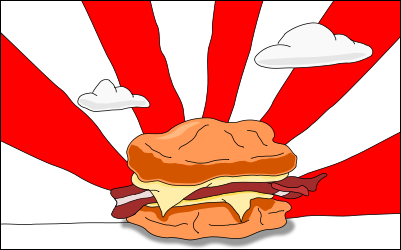 The next thing I knew, I was in heaven standing by the pearly gates, with Saint Peter checking people off of a list. While I heard tell that on occasion the old boy did take a few bribes (otherwise, Michael Jackson would be in hell getting buggered repeatedly), I wasn’t about to mention to him that I’m an atheist.

At this point, God showed up. I’m not sure where he came from, but he’s fucking God, so I figure he can show up whenever and wherever he pleases, because that’s how omnipotence works. "Son," He says to me, "you got your wish. You finally got the Double Down. Tell me, son – was it worth it?"

I may be an atheist, but I’m not quite ready just yet to tell God that He doesn’t exist, or at least not until I’m safely tucked somewhere far away from the fires of hell and can commit blasphemy as I like. So I just kind of shrug and say, "Not really. Needed more sauce."

God nods his head. "Well, if it wasn’t the Rapture, I guess we have to send you back."

I don’t bother telling him that I had counted on looting Christians’ belongings after the Rapture, or that the "sandwich" was nowhere near the heavenly bliss needed to lift someone bodily toward heaven. If any fast food was going to induce Rapture and/or massive coronaries, it would have to be the Hardee’s Monster burger. I know the Monster burger well, and you, Mister Double Down, are no Monster. At least God seems well aware that his first attempt at bringing the faithful to Him via the magic of KFC is a failure.

So there I am, tapping my foot and waiting for God to send me back to my boring, mortal life and to finish my stack of meat. God tells me the elevator is running slow today and so I can wait, or I can take the stairs. "Fuck you," I said. "I just ate fifteen pounds of bacon, cheese and chicken. Do you know how many stairs there are between here and Earth? If I have to walk all that way, I’m gonna hurl."

To kill time while I wait for the elevator, God tries to strike up a conversation with me. "So, I haven’t seen you in church lately. What’s the problem?"

"Don’t want to talk about it," I reply bluntly. I briefly considered informing God of his non-existence and that all of this is probably just some hallucination generated by misfiring neurons as my brain cells die from lack of oxygen after the Double Down clogged up every valve in my heart like Atlanta traffic during rush hour. After a few moments’ thought, I decided not to, since it was better to be safe than sorry, or at least until I’m safely among the living and can disbelieve with impunity.

The elevator finally comes and wouldn’t you know it – it gets stuck halfway between heaven and Earth. I had to wait an hour for it to be fixed, and all the while I had to listen to Pauly Shore singing his rendition of "Margaritaville", which was apparently the only elevator music in rotation. After desperately gouging out both my eardrums with my belt buckle, I finally made it back to the land of the living.

Back among the living, I picked up the half-eaten Double Down and took one final bite. It’s okay, but not great. I’m frankly a little disappointed.

The Chef was born 856 years ago on a small planet orbiting a star in the Argolis cluster. It was prophesied that the arrival of a child with a birthmark shaped like a tentacle would herald the planet's destruction. When the future Chef was born with just such a birthmark, panic ensued (this would not be the last time the Chef inspired such emotion). The child, tentacle and all, was loaded into a rocket-powered garbage scow and launched into space. Unfortunately, the rocket's exhaust ignited one of the spectators' flatulence, resulting in a massive explosion that detonated the planet's core, destroying the world and killing everyone on it.

Your host, hero to millions, the Chef.
Oblivious, the dumpster containing the infant Chef sped on. It crashed on a small blue world due to a freakish loophole in the laws of nature that virtually guarantees any object shot randomly into space will always land on Earth. The garbage scow remained buried in the icy wastes of the frozen north until the Chef awoke in 1901. Unfortunately, a passing Norwegian sailor accidentally drove a boat through his head, causing him to go back to sleep for another 23 years.

When the would-be Chef awoke from his torpor, he looked around at the new world he found himself on. His first words were, Ã¢â‚¬Å“Hey, this place sucks." Disguising himself as one of the planet's dominant species of semi-domesticated ape, the being who would become known as the Chef wandered the Earth until he ended up in its most disreputable slum - Paris, France.

Taking a job as a can-can dancer, the young Chef made a living that way until one day one of the cooks at a local bistro fell ill with food poisoning (oh, bitter irony). In a desperate move, the bistro's owner rushed into one of the local dance halls, searching for a replacement. He grabbed the ugliest can-can dancer he could find, and found himself instead with an enterprising (if strange) young man who now decided, based on this random encounter, to only answer to the name Ã¢â‚¬Å“Chef".

His success as a French chef was immediate (but considering that this is a country where frogs and snails are considered delicacies, this may or may not be a significant achievement). Not only was the Chef's food delicious, it also kept down the local homeless population. He rose to the heights of stardom in French cuisine, and started a holy war against the United Kingdom to end the reign of terror British food had inflicted on its citizens.

When the Crimean War broke out around France, the Chef assisted Nikola Tesla and Galileo in perfecting the scanning electron microscope, which was crucial in driving back the oncoming Communist hordes. It would later be said that without the Chef, the war would have been lost. He was personally awarded a Purple Heart by the King of France.

After that, the Chef traveled to America, home of such dubious culinary delights as McDonald's Quarter Pounder With Cheese. He immediately adopted the Third World nation as his new home, seeing it as his job to protect and enlighten it. When the Vietnam War began, he immediately volunteered and served in the Army of the Potomac under Robert E. Lee and General Patton. During the war, the Chef killed dozens of Nazis, most of them with his bare hands.

Marching home from war across the floor of the Atlantic Ocean, stark-naked and freezing, the Chef wound up on the shores of Mexico. He spent several years there, drinking tequila with Pancho Villa and James Dean. He put his culinary skills to the test when he invented the 5,000-calorie Breakfast Chili Burrito With Orange Sauce (which is today still a favorite in some parts of Sonora).

Eventually, the Chef returned to his adopted home of America, where he met a slimy, well-coiffed weasel who was starting up a new kind of buffet - one dedicated to providing the highest-quality unmentionable appetizers to the online community. The Chef dedicated himself to spreading the word of his famous Lard Sandwich (two large patties of fried lard, in between two slices of toasted buttered lard, with bacon and cheese), as well as occasionally writing about his opinions on less-important topics than food.

View all posts by The Chef →